The IREC 2018 team launched the final version of their rocket on Thursday, June 21 at the Intercollegiate Rocket Engineering Competition in Spaceport America, New Mexico. Flying to an altitude of 28,448 feet, the rocket reached an apogee close to the team’s target altitude of 30,000 feet. It successfully recovered under drogue, and remained completely intact throughout the flight. All of these factors went into the team’s flight altitude and performance scores, winning the team second place in their category.
The rocket featured many student researched and designed components, including an avionics bay with a long-distance radio system, a reduced-diameter recovery system, a tip-to-tip carbon fiber fin lay-up, a powered decoupling mechanism, and a software-defined GPS payload.
The team is excited to return next year, with new designs and a continued enthusiasm for engineering excellence. Forwards and upwards!

This last week, SSI Rockets embarked on a long journey to New Mexico to compete in the first inaugural Spaceport America Cup, one of the world's largest rocketry competitions, with over a hundred teams from five continents. 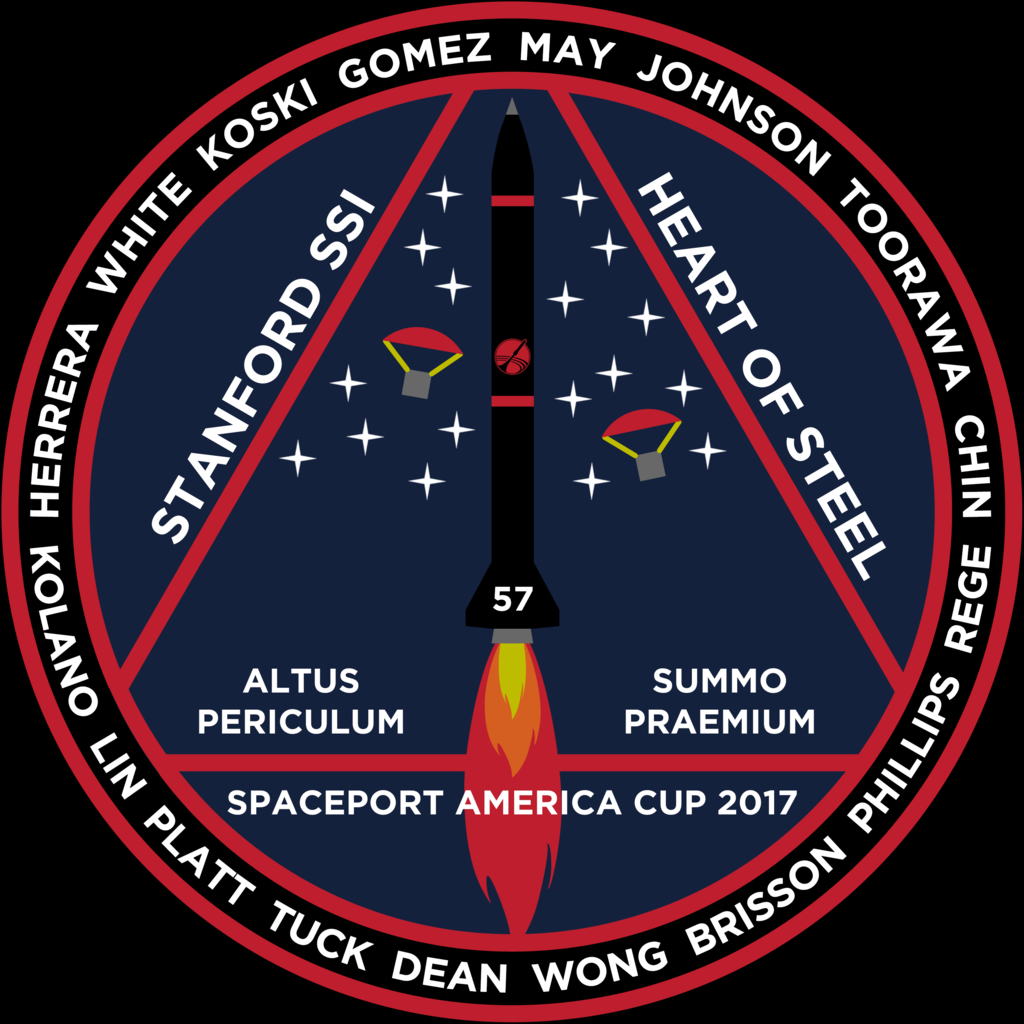 After a long car trip to Spaceport America in New Mexico, we set about preparing for launch in the blistering 118F heat and occasional 25mph winds. And although everything we owned was soon covered in a light layer of dust, we managed to be one of the first teams to launch! 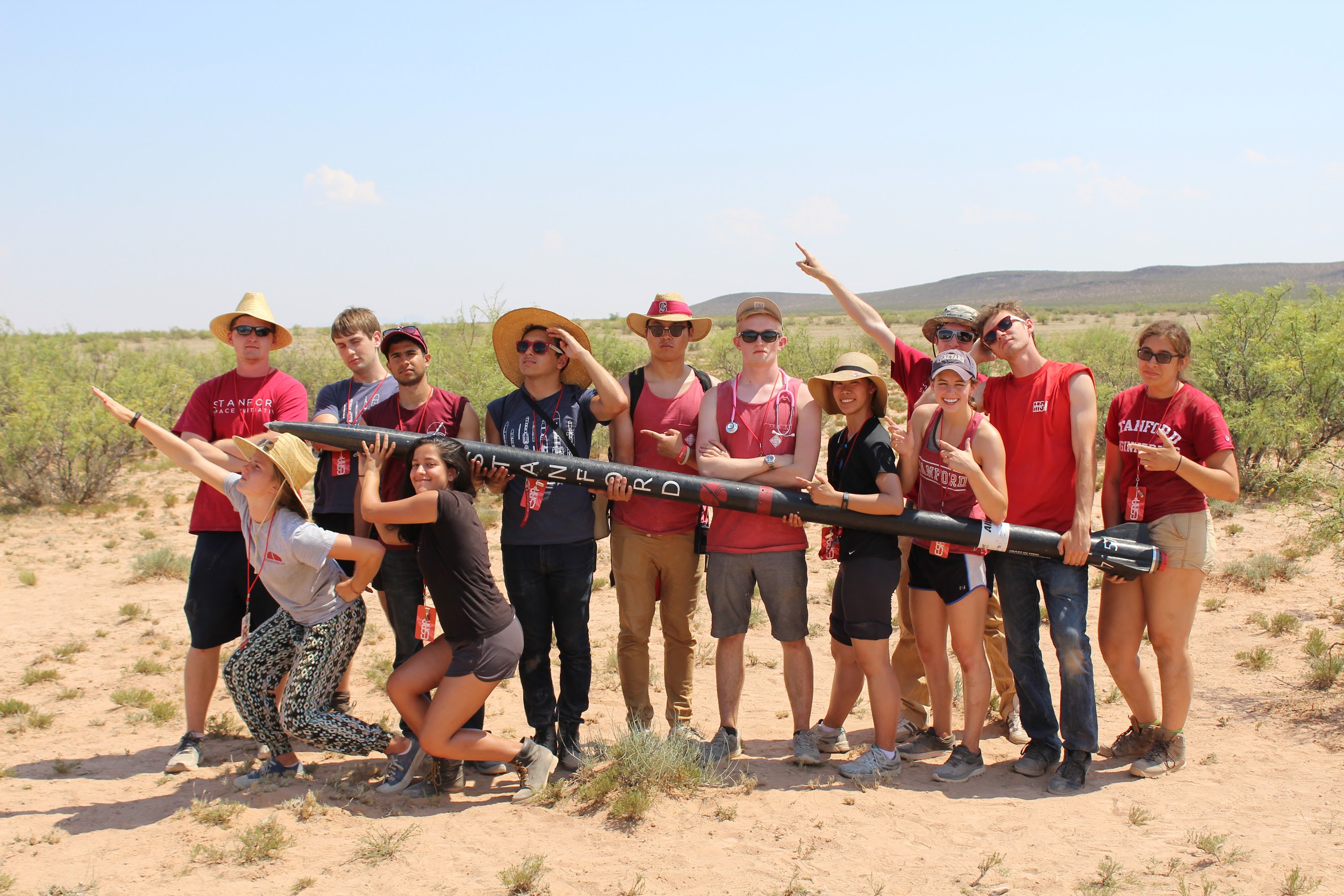 The IREC team at the launch site, taking a break just before launch!

Our rocket, Heart of Steel, officially became SSI's fastest and highest launch, getting within 1.5% of our altitude target of 30,000 feet, reaching a final maximum velocity of 1.8 times the speed of sound and enduring, at one point during recovery, over a hundred gravities of acceleration! Although we suffered an imperfect recovery and our payload - a novel telemetry system which does not require a ground station - failed to deploy, our launch overall was one of the most successful in the competition.

In fact, when the (literal and figurative) dust had settled, we were first place in our altitude and motor category, with a score nearly 50% higher than the second place team! 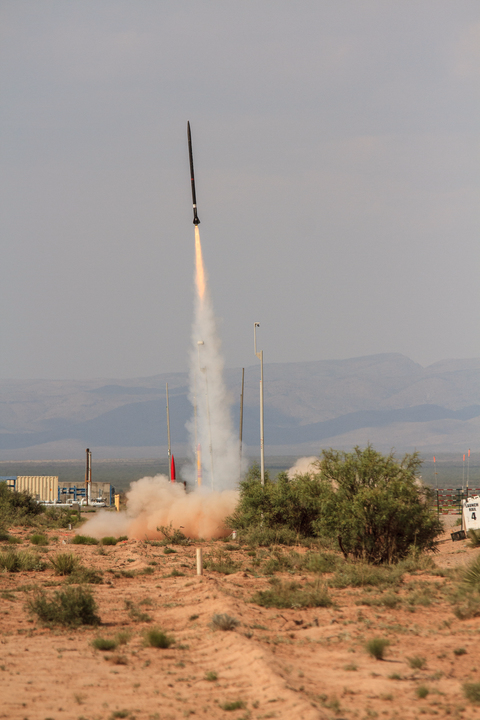 
We are immensely grateful to everybody who made this success possible - our team, the university, our sponsors, our friends in the amateur rocketry community, and of course Spaceport America and the Experimental Sounding Rocket Association, for making all of this possible. IREC 2017 was a wonderful experience, full of growth and progress for our team - we gained invaluable experience managing what was by far our largest project yet, becoming even more professional and efficient, forming relationships in the collegiate rocketry community and building the expertise we need to make even greater leaps in the future!

We are impossibly excited for this coming year and are already busy cooking up something even cooler - onwards and upwards! 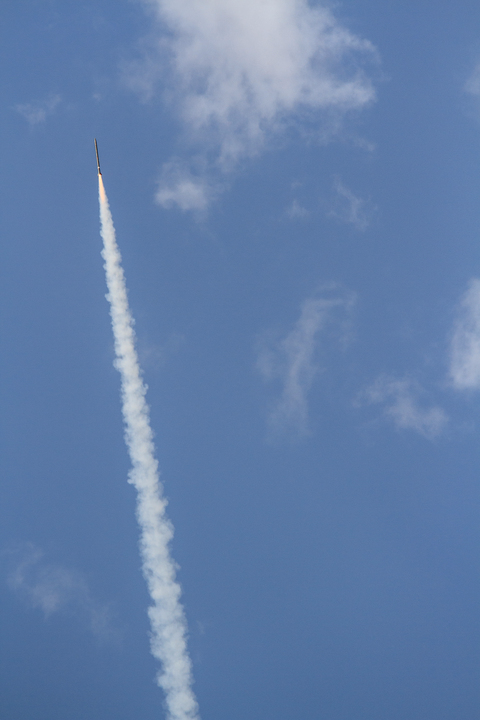 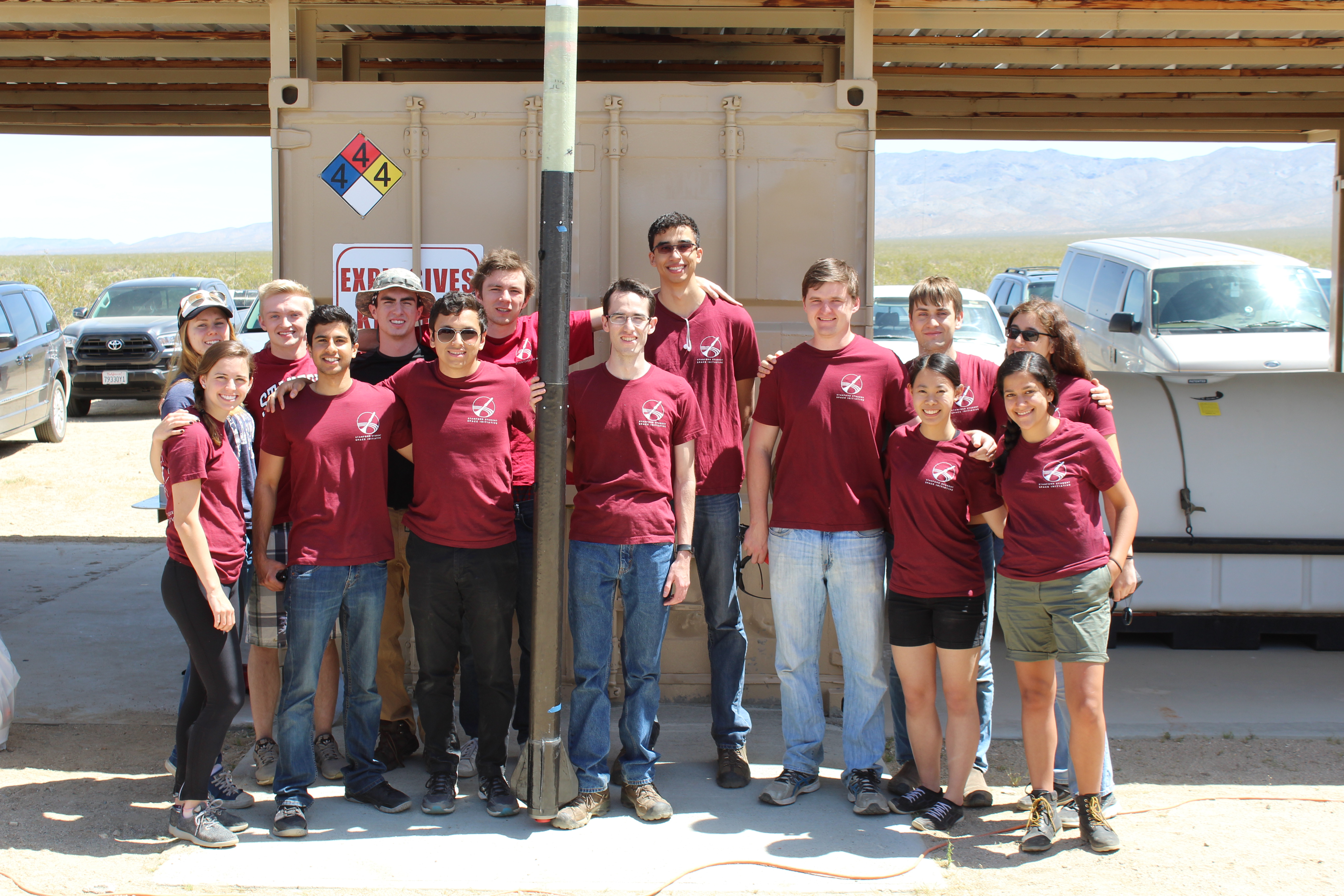 This past Saturday, April 16th, the IREC team on Rockets made a journey down to the launch site owned and operated by the Friends of Amateur Rocketry (FAR) near Mojave, CA. It was a long car ride there and back, but it was well worth getting a chance to test the rocket design that we will ultimately take with us to New Mexico for the Spaceport America Cup in June.

Although we only managed to get one flight of our rocket in, we were very pleased with the opportunity to test all of our basic systems, from the deployment mechanism for our payload, to our motor retention system, to our SRAD avionics and beacon + GPS tracking. All of our sub-teams learned a lot from the journey and were excited that we got to return home with all of our components in-tact and recovered! We're looking forward to our next test launch when we return with various tweaks and improvements. 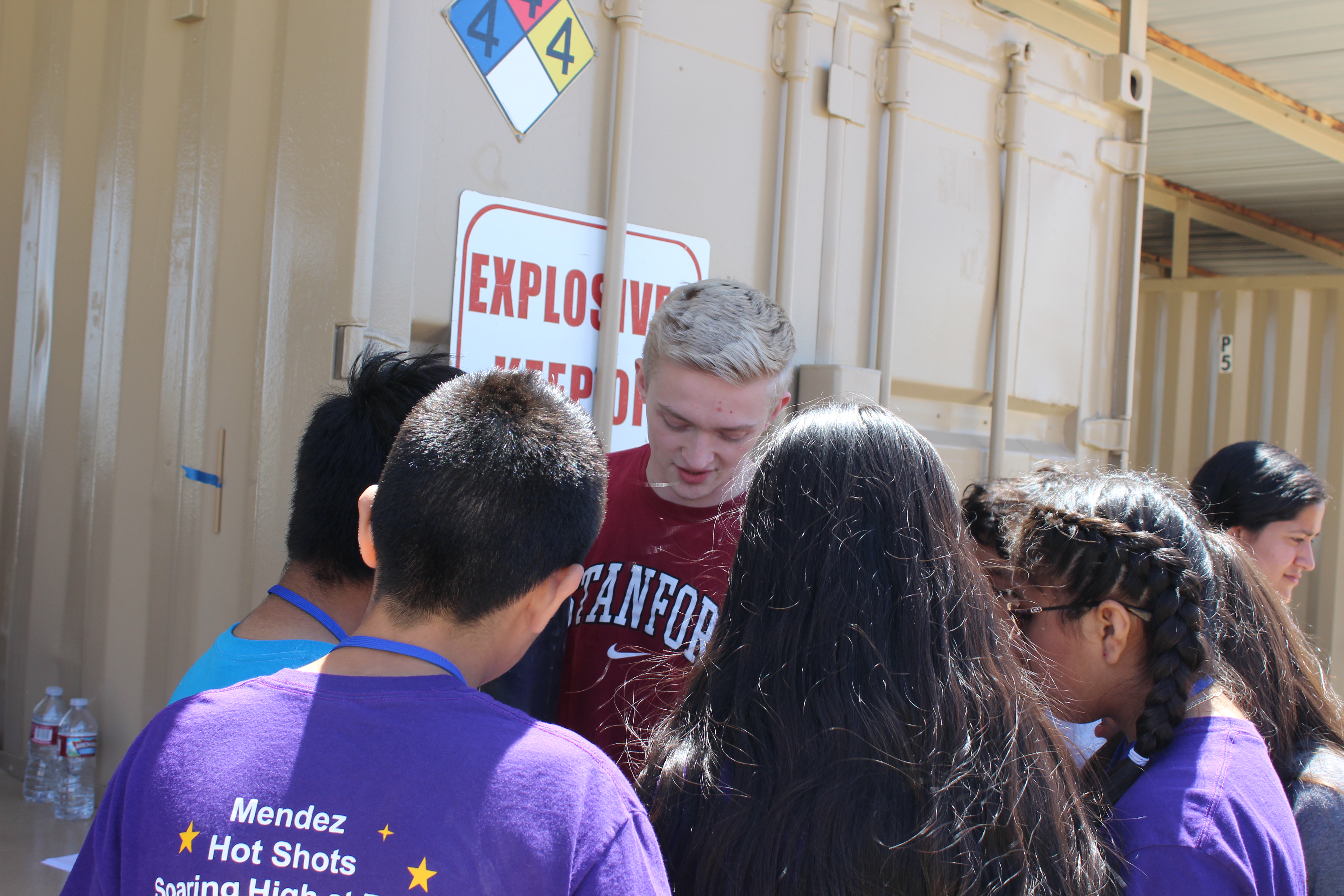 
Some additional bonuses to the trip were getting to meet the Cal Poly team and watch their rocket have a beautiful flight, and getting a chance to chat with some local middle school students about our project! Lastly I'd like to make a large shout-out to Eric Melville for his continuous support as we progress through our project. He's been a wealth of guidance and information both on and off the launch site. Thank you, Eric! 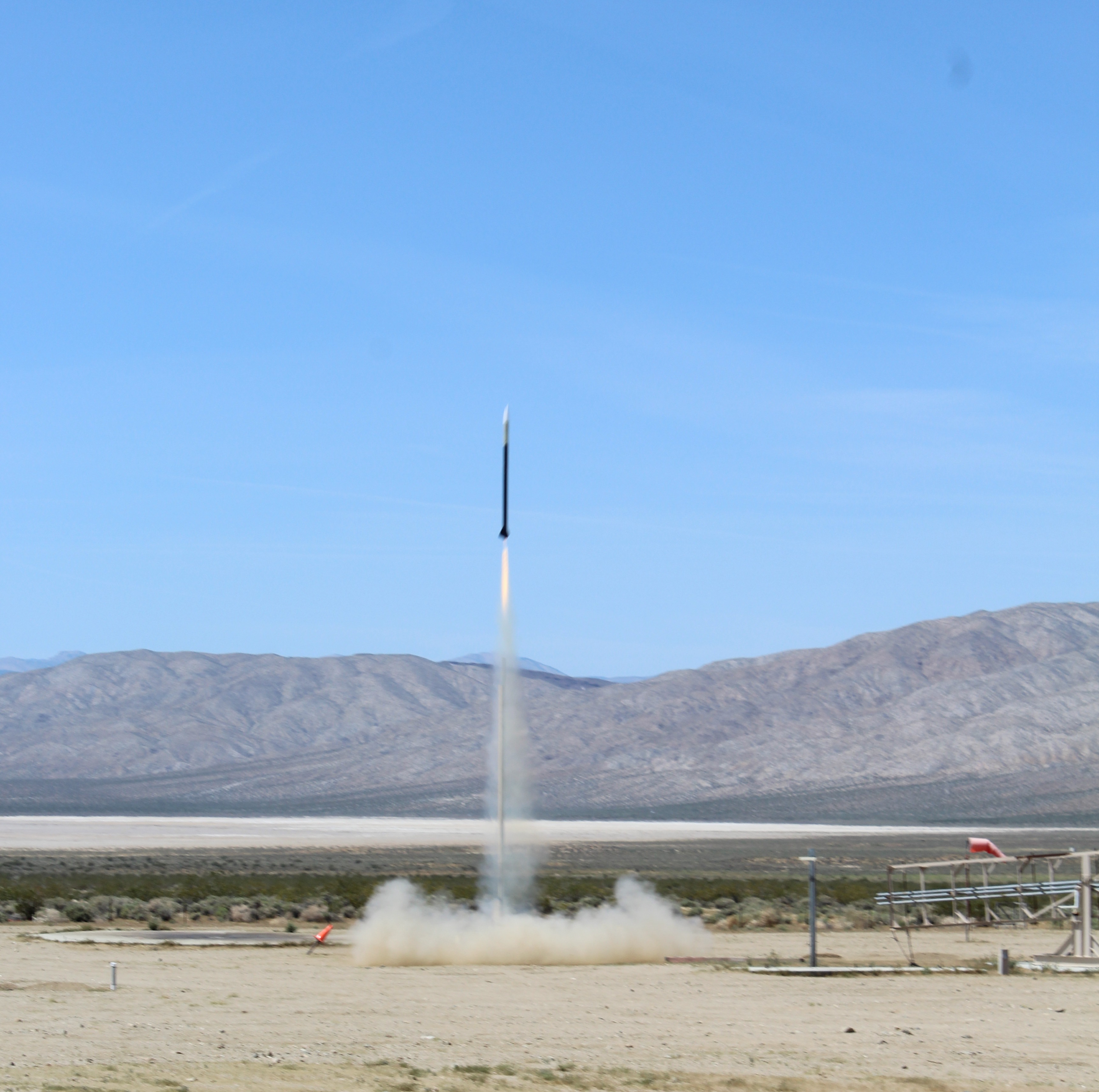 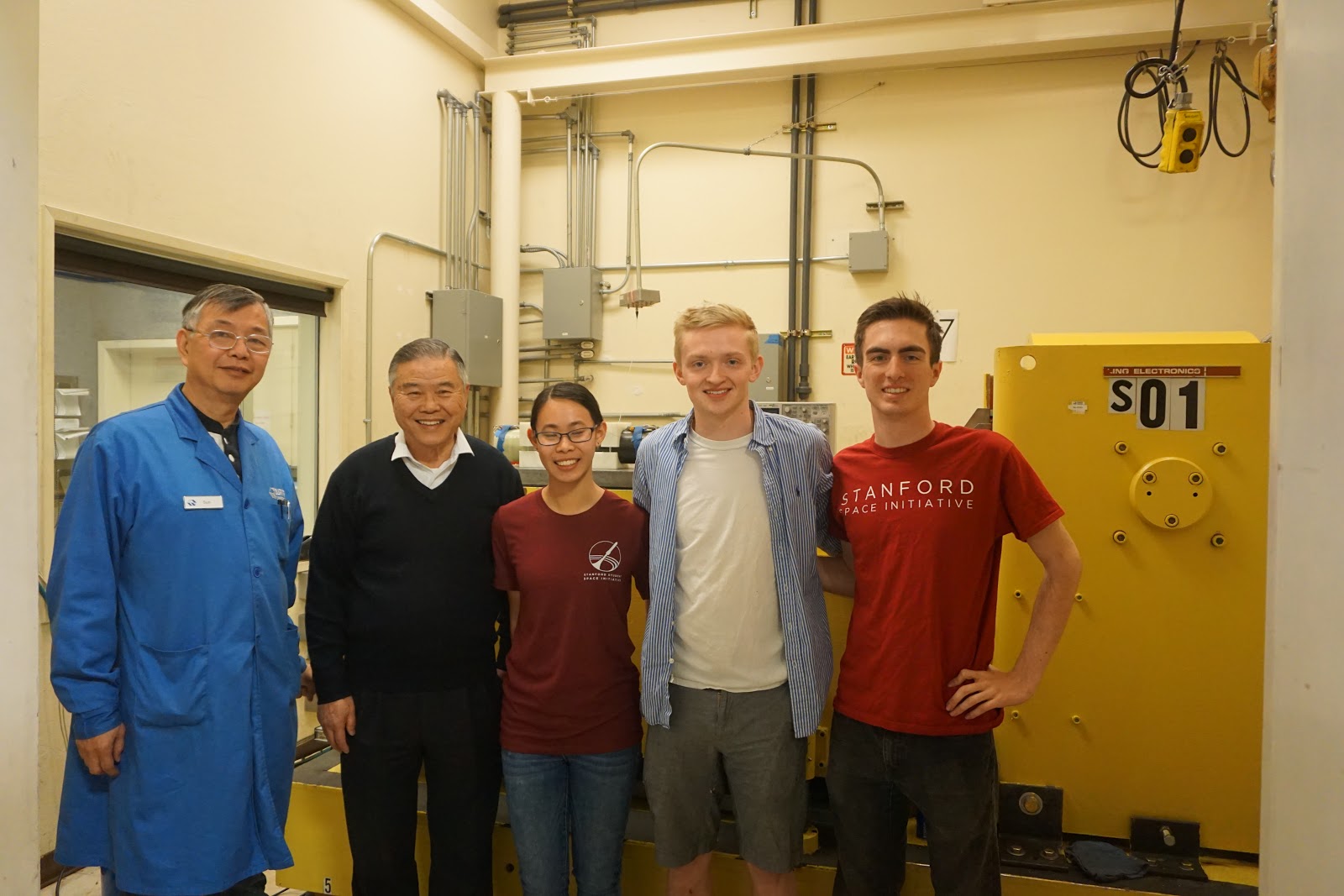 On Tuesday, March 7th, members of our rockets Intercollegiate Rocket Engineering Competition (IREC) team visited Quanta Labs to perform a vibration test of our avionics system. Our unit passed the test. No major problems were detected, but we did gain insight into how to make our avionics system even more vibration and shock tolerant.

The Avionics System:
The avionics system in our rocket for IREC has been designed for high-reliability using redundant commercial altimeters and a custom student researched and developed flight computer. Its main function is to trigger deployment of the payload and recovery parachutes. In addition, the unit provides an RF beacon for locating the rocket after landing and a telemetry stream of live flight data using an RF link. Thanks to our recent sponsorship from Harwin, our avionics system features high-reliability connectors in important, safety critical connections. 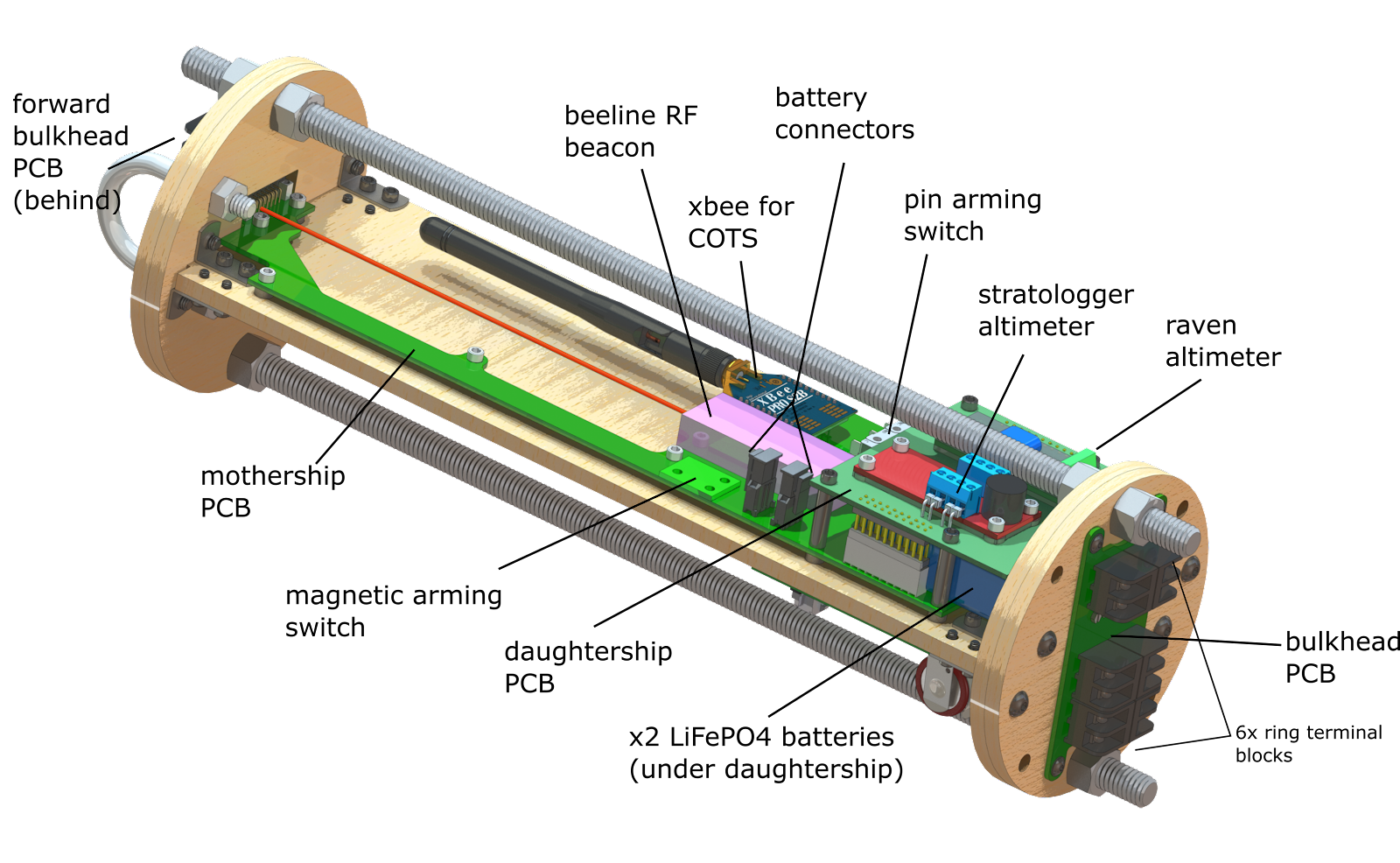 The Test:
The unit that we tested included the parachute deployment assembly and avionics. This full assembly sat inside a sample section of our in-house custom fiberglass and carbon fiber airframe. To fixture our airframe section to the shake table, a CNC’ed delrin clamp was bolted into the shake table. 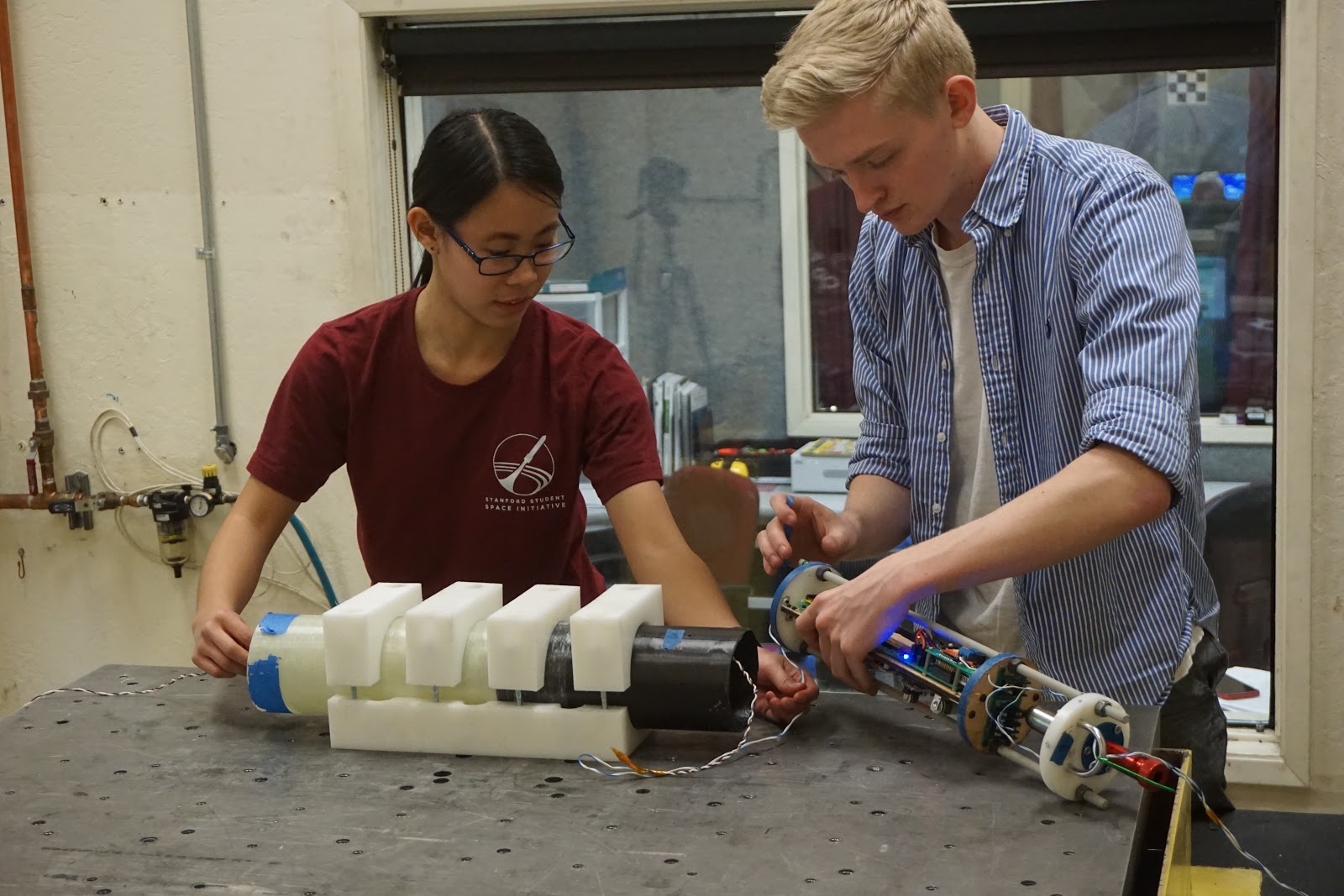 Integration of the system on the shake table


Using a shaker table at Quanta Labs, we performed the following tests of the system

The test specifications came from two sources. For shock, we used real values that we had recorded on previous flights. For vibration, we used the specs from the NASA Sounding Rockets User Handbook - Vehicle Level 1. These vibration specs are used to qualify payloads for going to space on NASA sounding rockets.


Here is a plot of the spectral content of the vibration applied for one of the tests:

To measure the continuity of the ignition lines from the avionics bay during the vibration and shock tests, we used one of our Keysight oscilloscopes, and recorded a 30 second session of the voltage across all of the lines. 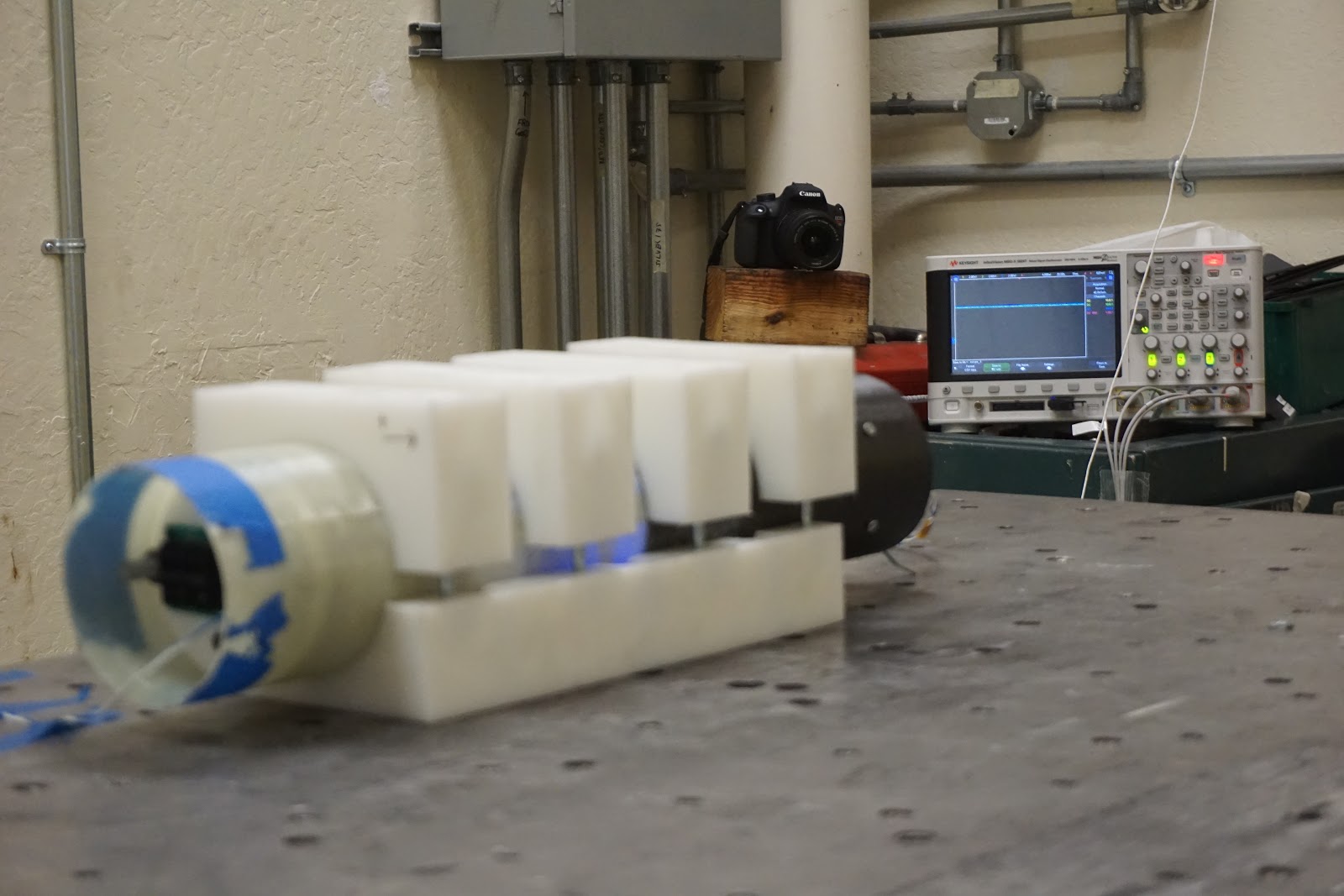 
Here are some other pictures from our testing: 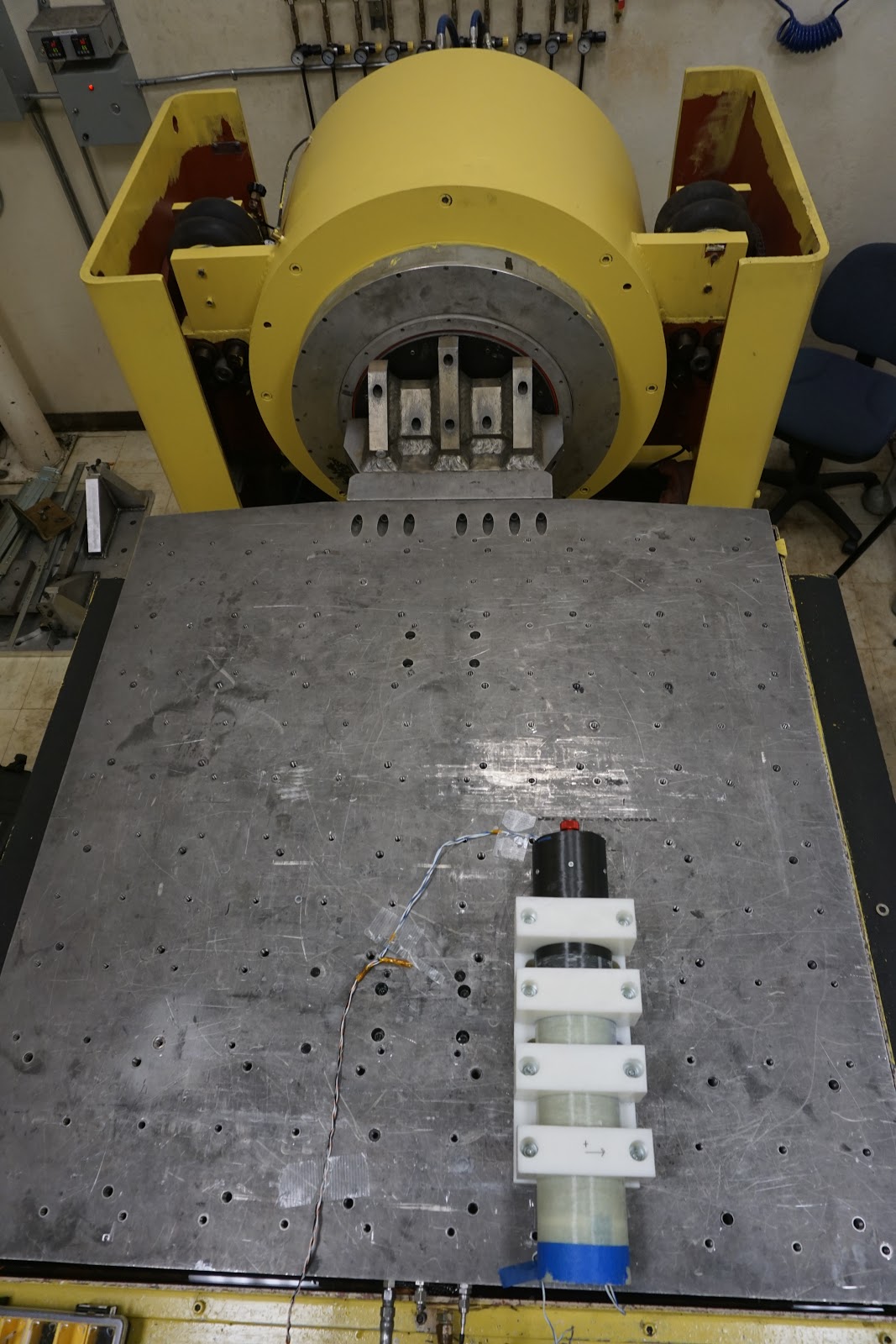 Overhead view of the shake table 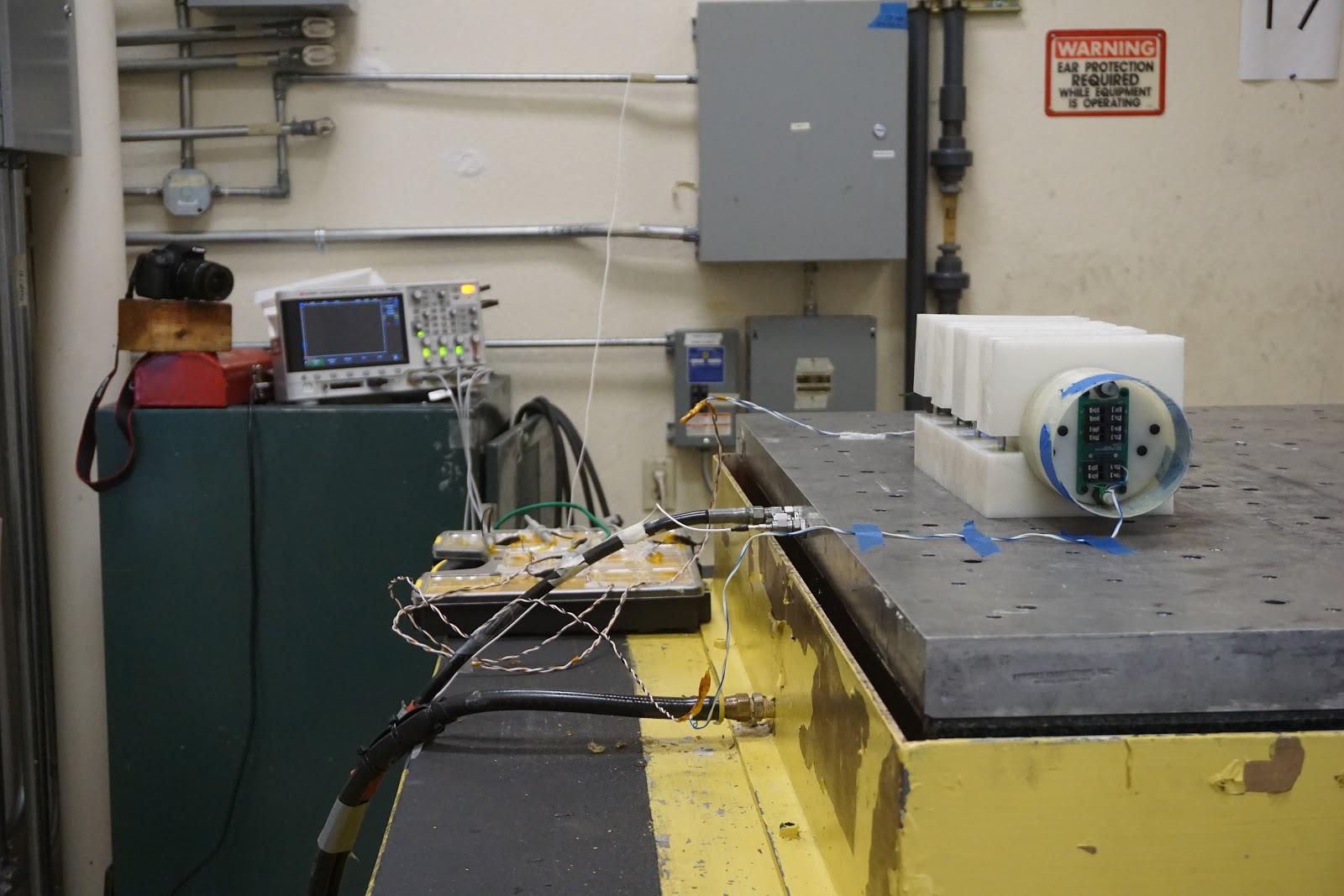 Connections for the test

We owe a huge thanks to Quanta Labs for providing their facilities and time to allow us to perform this test. Vibration and shock testing is critical for safety and reliability, and would not be possible without our sponsors. 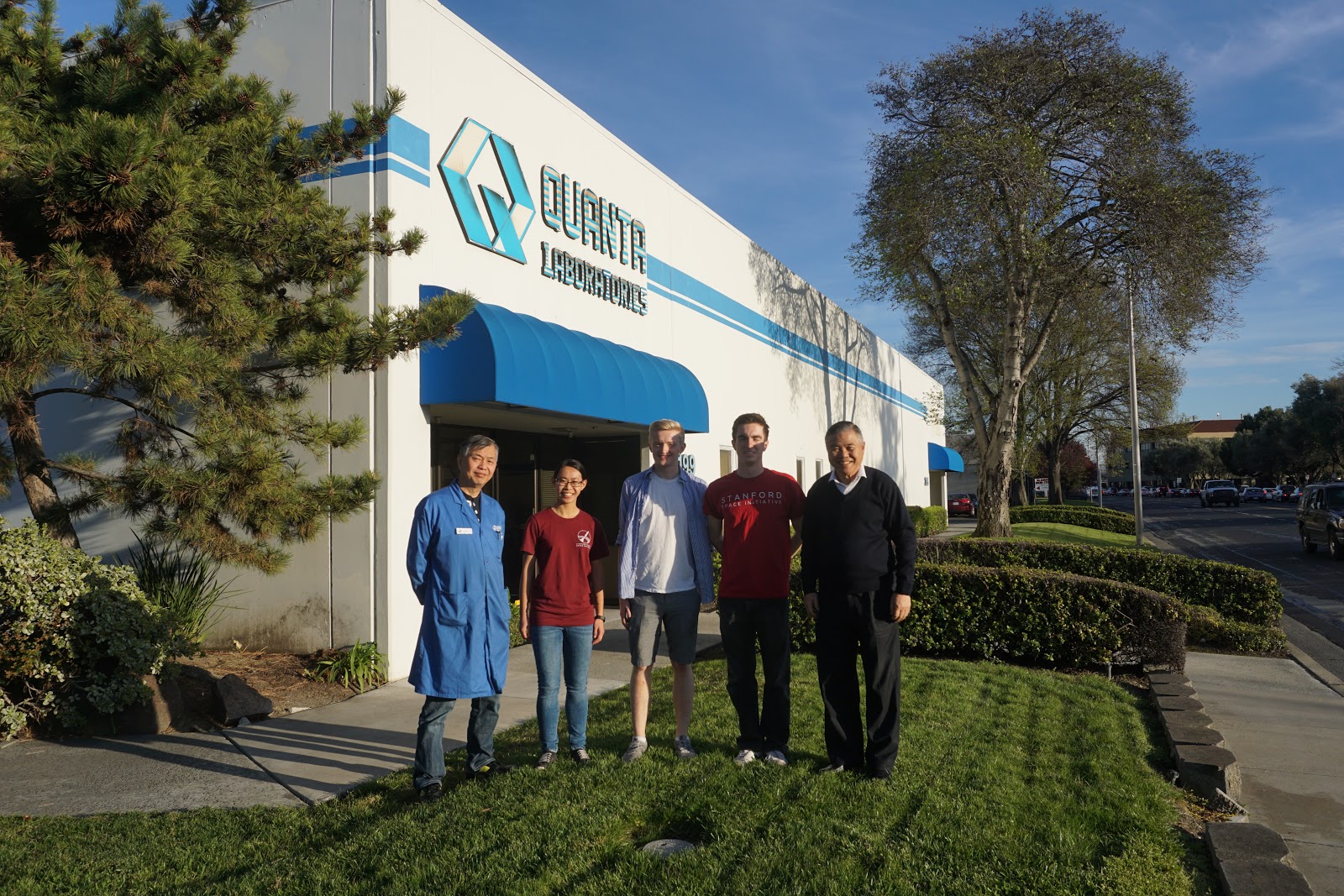 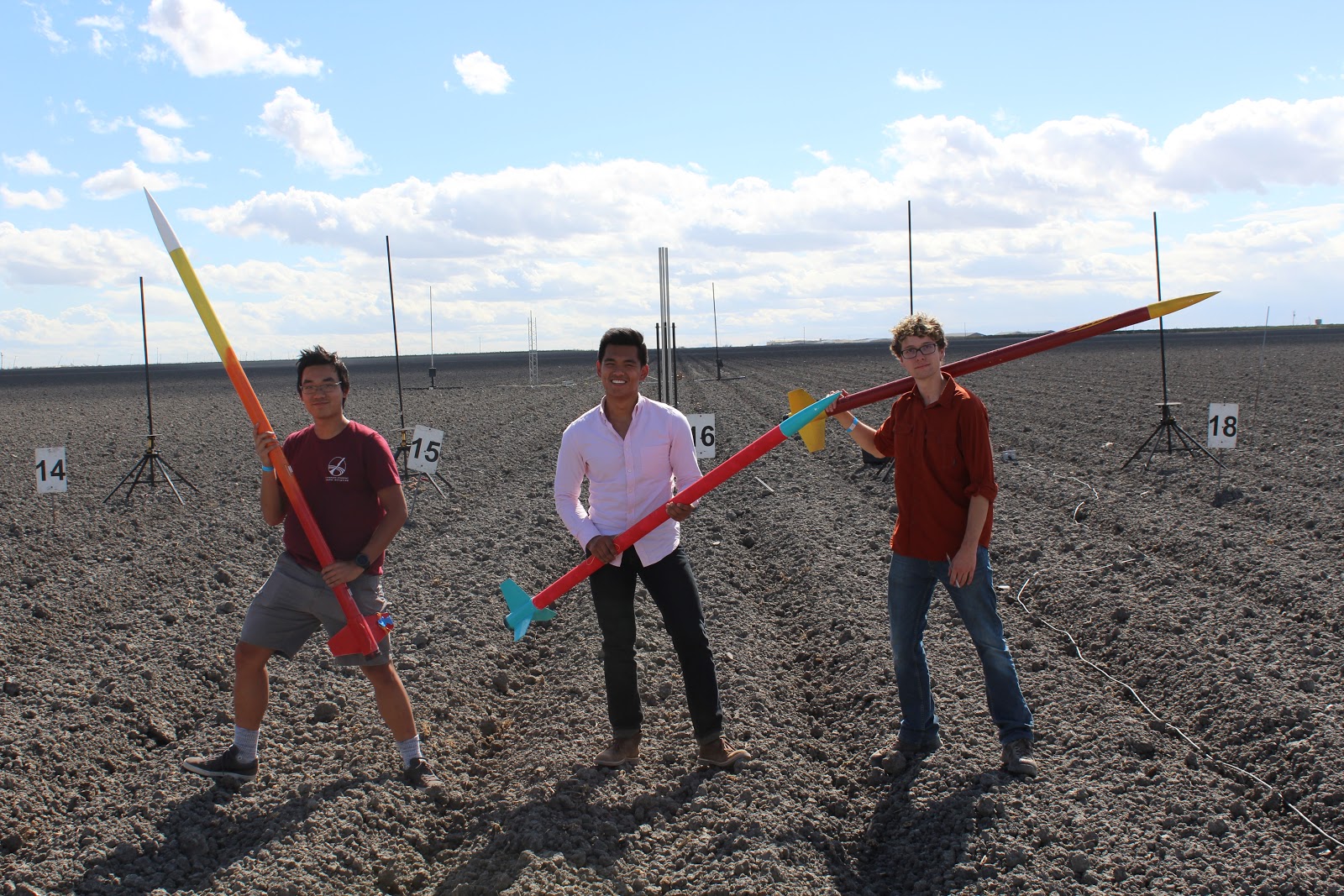 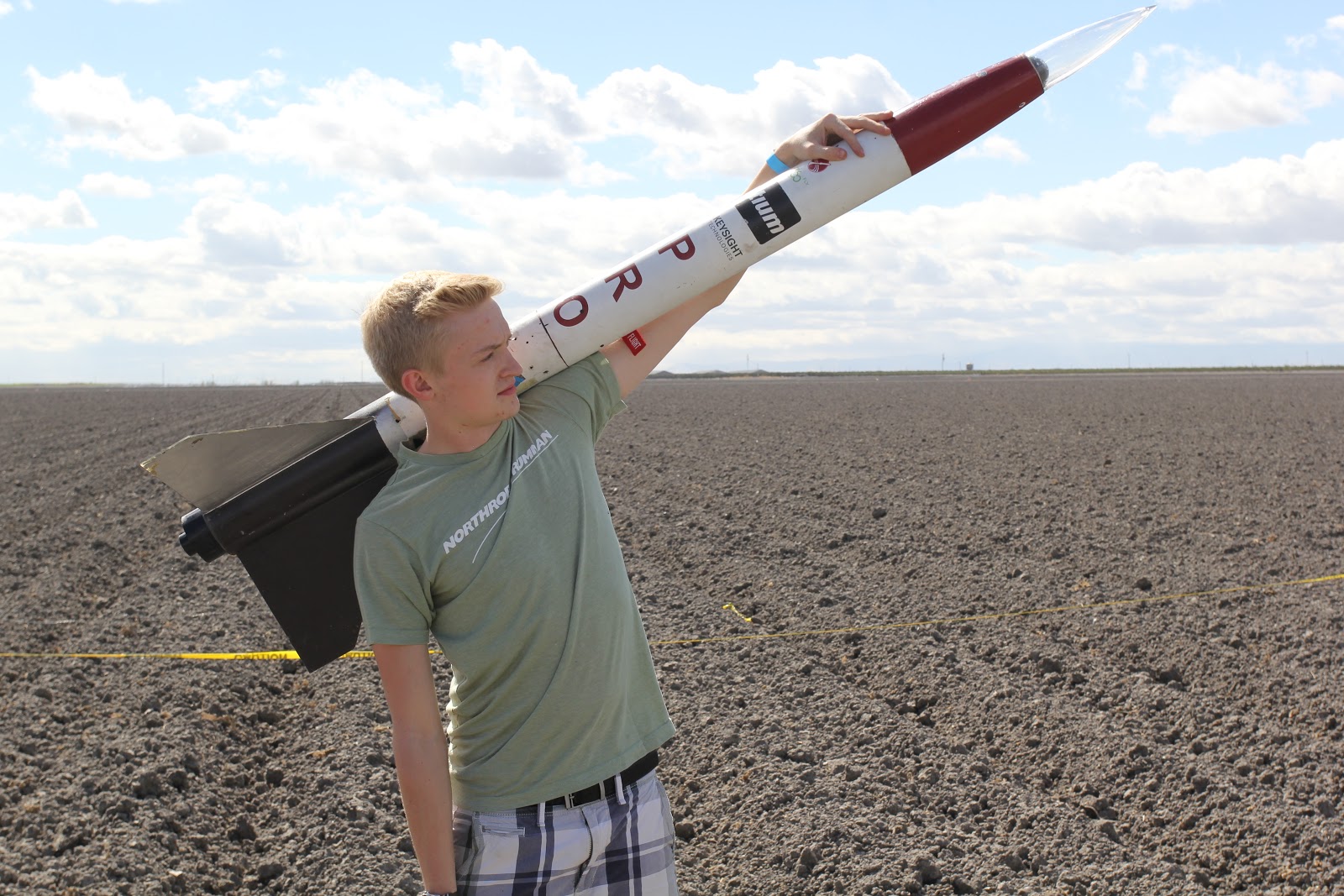 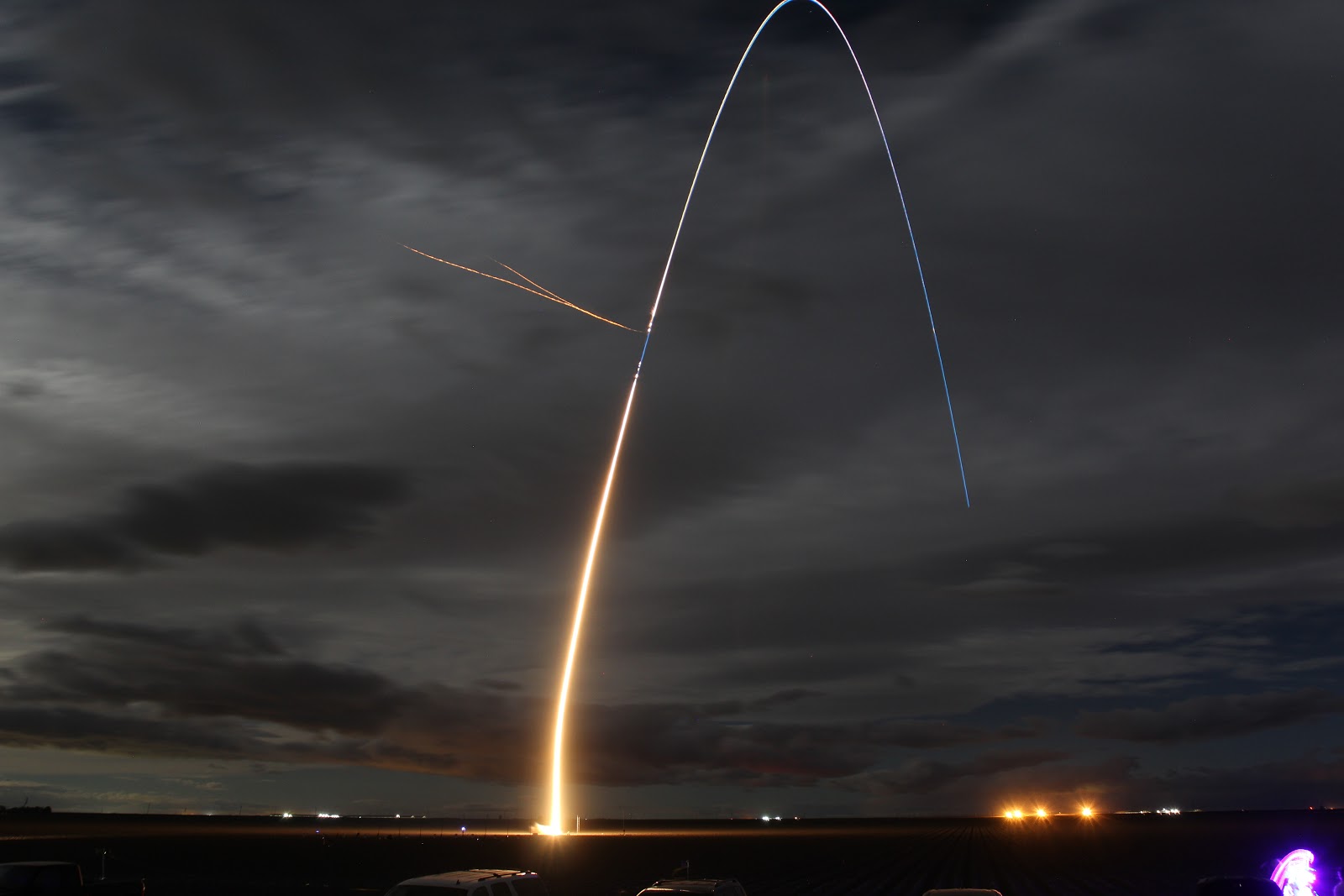 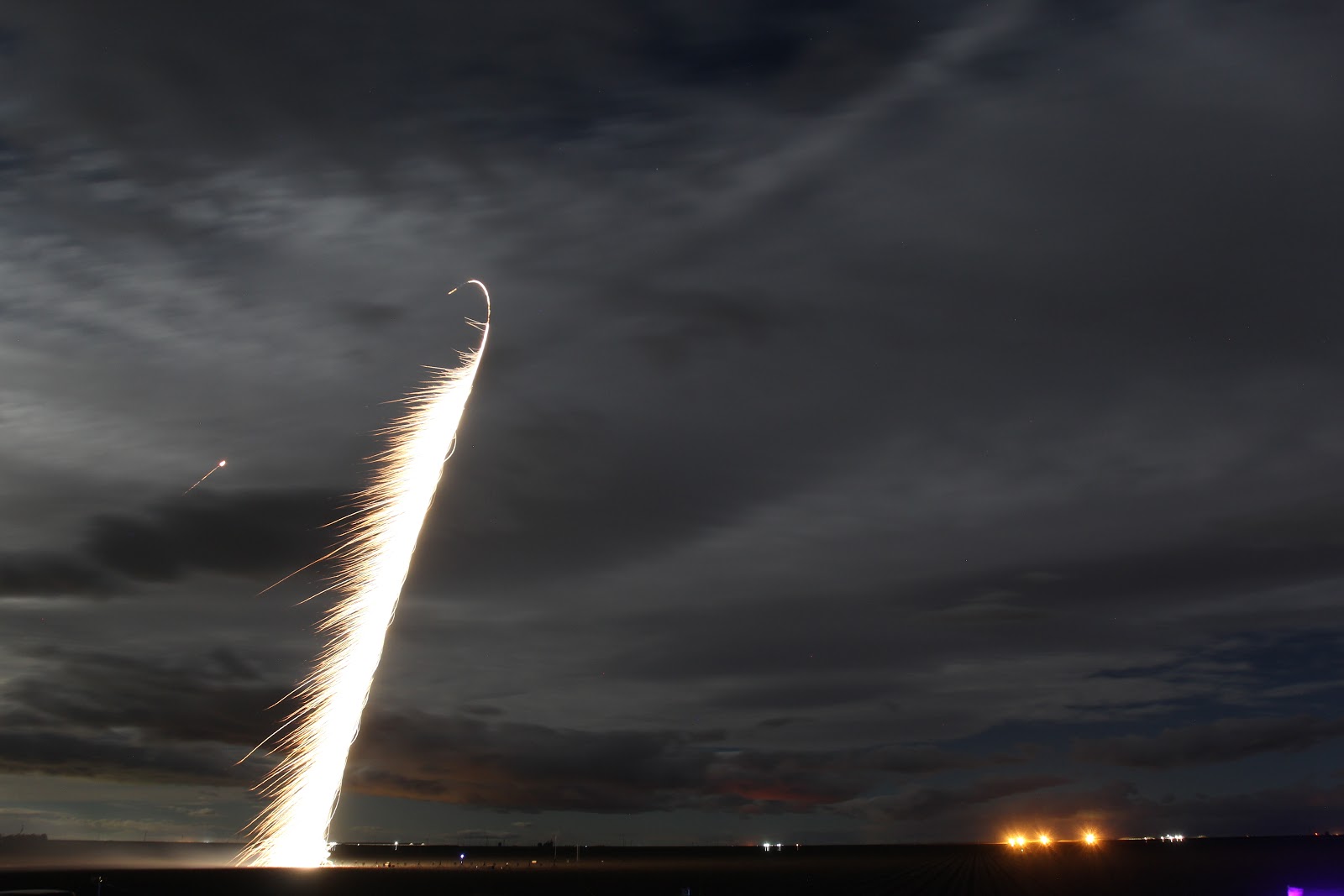